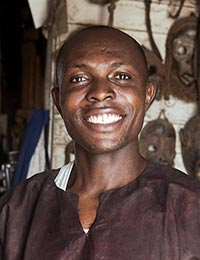 "What inspires me most is when people express appreciation for my designs."

"I am a calm, humble and quiet person who also loves arts and crafts. I was born on November 22, 1985 in a suburb of the Greater Accra region. When I was in primary school, I admired art and used to draw animals and images that I found.

"After school, I'd stop by the workshop of Salihu Ibrahim (a Novica-featured artisan) to observe him and his workers as they carved different objects out of raw wood. They really caught my attention, and I visited the workshop daily. Realizing my interest, Salihu offered to train me. I was most interested, so learning the skill was not a difficult thing. Within a short time, I could finish the carved items. At a certain point in time, my parents could not afford to further my education so I decided to continue learning under Salihu and pursue a career in this field.

"I was first trained as a finisher, but Salihu did not want me to be handicapped in the business so he also trained me in the types of wood and what items they can be used to produce. To be sure I was taking my studies seriously, I was asked to pick up carved items from his carvers in a distant place.

"It was the first time I had gone there all by myself. Unfortunately, after I finished checking on all the carved items, it rained so heavily that no vehicle there was willing to move. I felt so uncomfortable sleeping there. I was really out of my comfort zone!

"When I finally returned home with the carvings, I narrated my story of what I had been through and Salihu burst out laughing. He told me this was all part of the things I needed to learn. The experienced I was faced with meant I needed to consider such delays when planning.

"I worked with Salihu for about seven years. I should have moved out of his workshop but I have not enough resources to start up on my own. I still work from his workshop producing my own carvings to sell, and hope to make enough money to be able to move out and set up on my own.

"What inspires me most is when people express appreciation for my designs. It is my dream to one day become the owner of a well-established art workshop and be able to employ many workers to reduce the alarming rate of unemployment in my country."